How Tiny Bioelectronic Implants Could One Day Replace Pharmaceutical Drugs

For Kelly Owens, the answer was clear. She spent more than a decade suffering from Crohn’s disease, a chronic inflammatory bowel disease that left her with severe arthritis in her joints. The pain forced him to use a cane, sometimes a wheelchair. She tried over 20 drugs and racked up over a million dollars in medical bills, but her condition did not improve.

A doctor told Owens and her husband that they shouldn’t have children and that she should be on steroids for life.

Then Owens turned to bioelectronic medicine. She contacted Dr. Kevin Tracey, a pioneer in the field and president and CEO of the Feinstein Institutes for Medical Research in New York. Soon after, Owens and her husband moved to Amsterdam to participate in a clinical trial involving a relatively new bioelectronic approach to treating inflammation.

Doctors implanted a small electronic device in his chest that stimulated his vagus nerve, the longest cranial nerve in the body. After two weeks, Owens no longer needed a cane or a wheelchair. Soon she was jogging on a treadmill.

A growing body of research in bioelectronic medicine shows that it is possible to treat diseases by manipulating the nervous system. The field is essentially an amalgamation of neuroscience, molecular biology, and neurotechnology. Dr. Tracey and his colleagues believe that this field could one day replace or complement many pharmaceutical drugs used to treat major diseases, including cancer and Alzheimer’s disease.

But how? The answer focuses on how the nervous system controls molecular processes in the body.

…the most revolutionary aspect of bioelectronic medicine, according to Dr. Tracey, is that approaches such as vagus nerve stimulation would not lead to harmful and life-threatening side effects, as many pharmaceutical drugs currently do.

You accidentally place your hand on a hot stove. Almost instantly, your hand withdraws.

What triggered the movement of your hand? The answer is not that you consciously decided that the stove was hot and you needed to move your hand. It was more of a reflex: the skin receptors in your hand sent nerve impulses to the spinal cord, which eventually sent the motor neurons back that dragged your hand away. This all happened before your “conscious brain” realized what happened.

Likewise, the nervous system has reflexes that protect individual cells in the body.

So what if scientists could “hack” the nervous system, manipulating electrical activity in the nervous system to control molecular processes and produce desirable results? This is the main objective of bioelectronic medicine.

“There are billions of neurons in the body that interact with almost every cell in the body, and at each of these nerve endings, molecular signals control molecular mechanisms that can be defined and mapped, and potentially mastered,” said Dr Tracey. in one TED Talk.

“Many of these mechanisms are also implicated in important diseases, such as cancer, Alzheimer’s disease, diabetes, hypertension and shock. It is very plausible that the discovery of neural signals to control these mechanisms holds promise for devices replacing some of the current drugs for these diseases.

How can scientists hack the nervous system? For years, researchers in the field of bioelectronic medicine have focused on the longest cranial nerve in the body: the vagus nerve.

Additionally, clinical trials show that vagus nerve stimulation not only “stops” inflammation, but also triggers the production of cells that promote healing.

Electrical signals, seen here in a synapse, travel along the vagus nerve to trigger an inflammatory response.Credit: Adobe Stock via solvode

The vagus nerve (“vagus” meaning “wandering” in Latin) comprises two nerve branches that extend from the brainstem to the chest and abdomen, where nerve fibers connect to organs. Electrical signals constantly travel up and down the vagus nerve, facilitating communication between the brain and other parts of the body.

One aspect of this back and forth communication is inflammation. When the immune system senses an injury or attack, it automatically triggers an inflammatory response, which helps heal the wounds and ward off invaders. But when not deployed properly, inflammation can become excessive, exacerbate the original problem and potentially contribute to disease.

In 2002, Dr. Tracey and his colleagues discovered that the nervous system plays a key role in monitoring and modifying inflammation. This happens through a process called the inflammatory reflex. Simply put, it works like this: When the nervous system detects inflammatory stimuli, it reflexively (and unconsciously) deploys electrical signals through the vagus nerve that trigger anti-inflammatory molecular processes.

The incredible chain reaction of the inflammatory reflex has been observed by Dr. Tracey and his colleagues in greater detail through experiments on rodents. When inflammatory stimuli are detected, the nervous system sends electrical signals that travel through the vagus nerve to the spleen. There, electrical signals are converted into chemical signals, which trigger the spleen to create a white blood cell called a T cell, which then creates a neurotransmitter called acetylcholine. Acetylcholine interacts with macrophages, which are a specific type of white blood cells that create TNF, a protein that, in excess, causes inflammation. At this point, acetylcholine prompts macrophages to stop overproducing TNF – or inflammation.

Additionally, clinical trials show that vagus nerve stimulation not only “stops” inflammation, but also triggers the production of cells that promote healing.

“In animal experiments, we understand how it works,” Dr. Tracey said. “And now we have clinical trials showing that the human response is what is predicted by laboratory experiments. Many scientific thresholds have been crossed in the clinic and in the laboratory. We’re literally at the point of regulatory milestones and milestones and then marketing and distribution before this idea takes off. 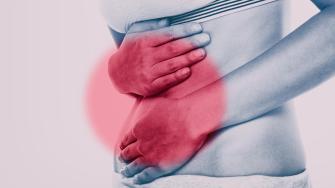 Vagus nerve stimulation can already treat Crohn’s disease and other inflammatory diseases. In the future, it could also be used to treat cancer, diabetes, and depression.Credit: Adobe Stock via Maridav

Vagus nerve stimulation is currently awaiting approval from the US Food and Drug Administration, but so far it has been shown to be safe and effective in human clinical trials. Dr Tracey said vagus nerve stimulation could become a mainstream treatment for a wide range of diseases, including cancer, Alzheimer’s disease, diabetes, hypertension, shock, depression and diabetes.

Receiving vagus nerve stimulation would require having an electronic device, the size of a lima bean, surgically implanted in your neck during a 30-minute procedure. A few weeks later you would visit, for example, your rheumatologist, who would activate the device and determine the correct dosage. The stimulation would take a few minutes each day and would probably be imperceptible.

But the most revolutionary aspect of bioelectronic medicine, according to Dr. Tracey, is that approaches such as vagus nerve stimulation would not cause harmful and life-threatening side effects, as many pharmaceutical drugs currently do.

“A device on a nerve will not have systemic side effects on the body like taking a steroid does,” Dr. Tracey said. “It’s a powerful concept that, frankly, scientists are completely on board with – it’s actually quite amazing. But the idea of ​​adopting this in practice is going to take another 10 or 20 years, because it’s difficult for doctors, who have spent their lives writing prescriptions for pills or injections, that a computer chip can replace the medicine.

But patients could also play a role in advancing bioelectronic medicine.

“There’s a huge demand in this cohort of patients for something better than what they’re currently taking,” Dr. Tracey said. “Patients don’t want to take a drug with a black box warning, costs $100,000 a year, and works half the time.”

“Why would patients be on medication when they could opt for a few electronic pulses? Is it possible that treatments like this, pulses via electronic devices, could replace certain drugs in the years to come as the treatments of choice? Tracey thinks so, and maybe that’s why the pharmaceutical industry is watching her work closely.

In the long term, bioelectronic approaches are unlikely to completely replace pharmaceutical drugs, but they could replace many, or at least be used as complementary treatments.

Dr. Tracey is optimistic about the future of the field.

“It’s going to give birth to a huge new industry that will rival the pharmaceutical industry for the next 50 years,” he said. “It’s not just a start-up industry anymore. […] It’s going to be very interesting to see the explosive growth that’s going to take place.